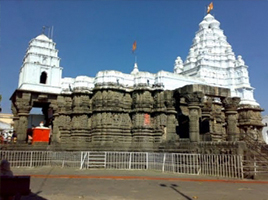 Aundha Naganath is a town and a tehsil in Basmat Subdivision of Hingoli district in Marathwada region of the Indian state of Maharashtra. There is famous Temple of Lord Shiva. The town is known for Aundha Nagnath Temple dedicated to Lord Shiva, which claims it to be one of the Twelve Jyotirlingas in India. It has been stated that this temple building was of seven-storyed before sacking it by Aurangzeb. This claim is disputed by Nageshwar Temple at Dwarka, Gujarat.

There is one famous story told about Sant Namdev and aundha nagnath, that when he was chanting Bhajan in front of Aundha Nagnath temple with Sant Dnyaneshwar, Visoba Khechara and few more Varkari, the temple pujari told them it is obstructing their temple prayer and asked them to go away from temple. Then all varkaris went back side of the temple and started chanting bhajan there. That time Lord Shiva turned the whole temple to listen bhajan that's why Nandi is located on back side of temple.

A pilgrim centre of great significance, since it is considered to be the first (aadya) of the 12 Jyotirlingas in the country. A part from this honour, the temple of Nagnath has exquisite carvings. Nanded, 64 km. by road from Aundha, is famous for the Such Khand Huzur Sahib Gurudwara where Guru Gobind Singh's ashes are buried. Aundha is a Holy place of eight jyotirlinga in the India.